Amazon in Talks to Invest in Indonesia’s Gojek

Amazon.com Inc. is in talks to make an investment in Indonesian ride-hailing giant Gojek, people familiar with the negotiations said, a move that could bolster the U.S. company’s presence in Southeast Asia. 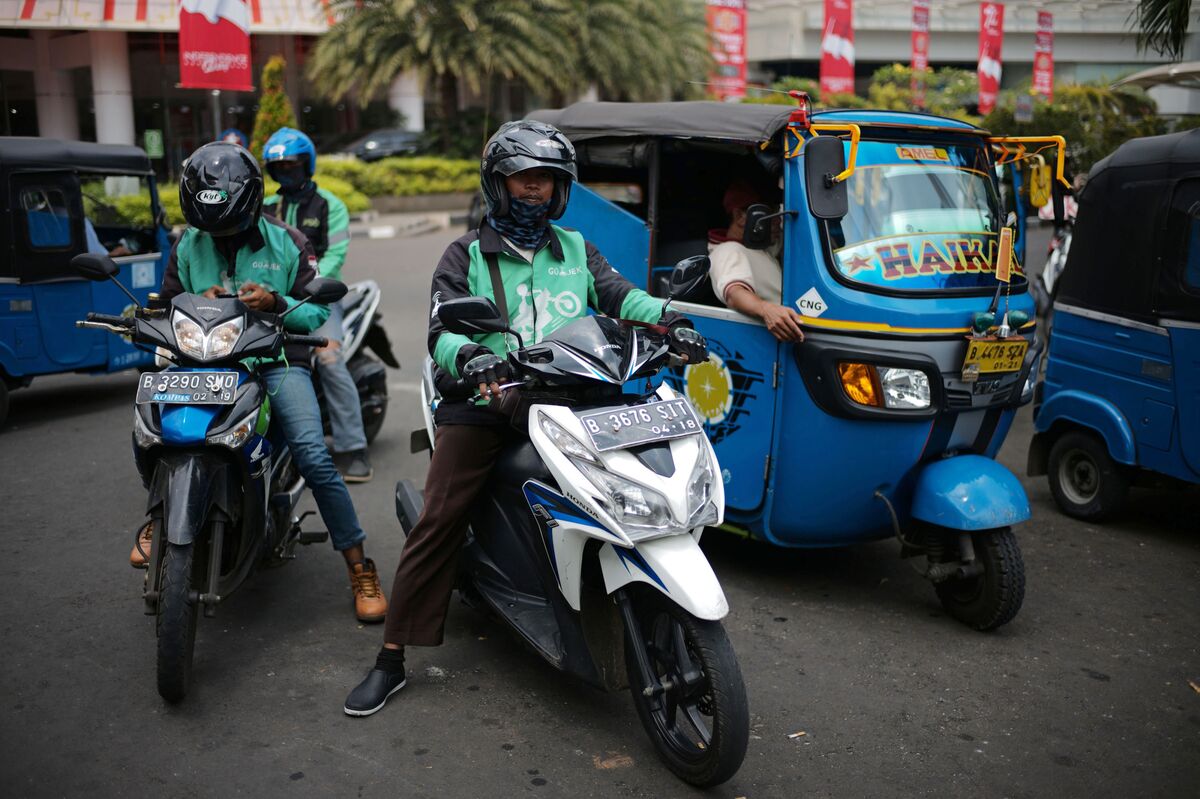 Amazon is one of the firms that have been negotiating with Gojek to join its ongoing funding round, according to the people, who asked not to be identified as the discussions are private. Under one scenario that has been considered, Amazon may make a meaningful investment for a slice of Indonesia’s most valuable startup, said one of the people. The talks may still fall apart or the terms may change.
A Gojek representative declined to comment. Amazon couldn’t immediately be reached for comment outside of normal business hours. The Wall Street Journal earlier reported on the discussions.
The move could mark Amazon’s most significant investment in Indonesia, one of the last frontiers of e-commerce. The Seattle-based retail giant took its first step into the region in 2017 when it entered Singapore with Amazon Prime Now. But in Indonesia, by far the region’s biggest and most promising market with 260 million people, it has no presence.
By contrast, Chinese tech titans have made inroads into the region recently. Alibaba Group Holding Ltd. spent billions of dollars to acquire online shopping company Lazada Group and invested in homegrown Indonesian e-commerce companies Tokopedia PT and Bukalapak. Tencent Holdings Ltd.has backed Sea Ltd., whose mobile shopping unit Shopee is battling fiercely with Lazada.
Gojek debuted its app for hailing motorbike taxis in Jakarta in 2015. Since then, the company has evolved into a “super app” — part ride-sharing service, part food-delivery business and part digital-wallet provider. It also offers a dozen other on-demand services such as booking a cleaner and medicine delivery.

As part of the ongoing Series F funding round, Gojek — valued at $10 billion, according to CB Insights — has secured investments from Visa Inc., Thailand’s Siam Commercial Bank Plc, Mitsubishi Motors Corp., Mitsubishi Corp. and Mitsubishi UFJ Lease & Finance Co. this year. The terms of those deals were not disclosed.

Visa Invests in Go-Jek for Digital Payments in Southeast Asia

Those investments added to more than $1 billion Gojek secured in a previous funding round earlier this year.

— With assistance by Manuel Baigorri

Whether in converted Art Deco office buildings or new glass towers, units are spending more time on the market and often selling below asking prices. After a spurt of construction aimed at foreign buyers, whose numbers are dwindling, and finance workers, who have seen many of their jobs move uptown, the area is plagued by oversupply.

“There was so much new development in that neighborhood and I think that many of the people who wanted to buy there did,” said Steven Gottlieb, a broker at Warburg Realty. “I don’t know that there is such a huge a demand for that neighborhood anymore.”
The Financial District has undergone multiple transformations since the Sept. 11, 2001, terrorist attacks, each raising expectations for a long-term recovery that would bring more retail, boost tourism and draw investors who would help lift prices. The area did get some of that, but so did the rest of Manhattan, as well as Brooklyn just across the East River.
Listings Lingered

Financial District apartment inventory grew 24 percent from a year earlier in the second quarter, led by new developments, according to a report by Corcoran Group. With all that supply, the average price for resale condos dropped 11%, and average new development prices fell 46%. No previously owned condo was sold for more than $1,600 a square foot, the first time that’s happened since 2013.

“Buyers are keenly aware of the amount of inventory available, and want to negotiate at all price points,” said Garrett Derderian at the brokerage Core.

In May and June, the most recent months available, the median time that Financial District apartments had been on the market was longer than either downtown Brooklyn, an easy subway commute to Wall Street, or the Long Island City neighborhood of Queens, just across the river from midtown Manhattan, according to StreetEasy.

Meanwhile, the construction downtown continues. In the next year, new luxury residential towers are set to open at 130 William St., 77 Greenwich St., 25 Park Row and 1 Wall St. All those new buildings make it that much harder to sell the old, converted office properties.

More conversions also are in the works. Developer Metro Loft is in contract to buy insurance giant AIG’s headquarters at 175 Water St. and convert the top half of the 31-story building to residential units, The Real Deal reported Aug. 16, without naming sources. Once AIG’s lease expires in 2021, the conversion will begin, the website reported. Metro Loft has led other office-to-residence projects in the area, including at 20 Broad St. A message left at Metro Loft seeking comment wasn’t immediately returned.

When 15 Broad St., the former headquarters of a forerunner of JPMorgan Chase & Co., was completed in 1928 across the street from the NYSE, the neoclassical building stood at the center of the financial world.

In 2006, it was among the first office-to-luxury-apartment conversions in the area, but upscale apartment buildings are now plentiful in the Financial District. A 28th floor studio with two bathrooms is listed at $1.5 million in the building, while just steps away at 25 Broad St., a brand new, two-bedroom, two-bath unit with similar amenities is listed for only slightly more at $1.58 million.

“These buildings are approaching 15 and 20 years old and not one has done any updates or remodeling of the common spaces,” said Martin Eiden, a broker at Compass who has sold real estate all over New York City for more than 20 years. “Most of the buildings were designed to be ultra-trendy. As such, they aged faster than traditional designs.”

As some of the biggest banks have relocated to Midtown, taking with them the highest-paid jobs, developers in the neighborhood have taken to building more small apartments for the entry-level analysts and other employees who put in long hours in the Financial District.

“The majority of housing stock available for purchase consists of one-bedroom or studio floorplans,” said broker Gill Chowdhury at Warburg Realty. Since January, 179 listings have sold or gone into contract, with those two categories representing 62% of the total units.

For singles or young families who are set on living in Manhattan, the Financial District may offer the best chance, said Scott Avram, senior vice president of development at Lightstone Group, a developer of 130 William St.

“If you want to live in Manhattan, you can often get the best product and the best value, whereas people were previously priced out of Manhattan and had to move to Brooklyn and Long Island City,” Avram said.

— With assistance by Oshrat Carmiel

In Asia, Australia, Europe and the Americas, yield curves are inverting simultaneously. Investors, fearing that the protectionist nations will be successful against globalization, are increasing the demand for the safe assets of dollars and U.S. Treasury bonds. Either the de-globalization fears are overblown, in which case Treasury yields have probably fallen too much, or they’re real, in which case global financial market correlations should break down as countries go their own way.
These possibilities show how perverse the pricing of U.S. Treasuries has become.
The first scenario is easy enough: Fears of the breakdown of globalization don’t come to pass. In that scenario stock markets get a reprieve and rally strongly as the risk premium from trade tensions fades. The uncertainty causing CEOs to hold off on investment decisions evaporates, and we get at least a short-term boom in investment as delayed projects get built. Global growth turns up, and bond markets sell off hard, with yields rising around the world.
The second scenario requires a few more assumptions. It would seem to lead to bad news for those who have bought U.S. Treasuries this month. Say we get a fairly disorderly breakdown in global trading relationships. As the Wall Street Journal’s Greg Ip noted, when assumptions underlying economic eras are shattered, global recessions are often the result. But recessions don’t last forever. In the U.S., since World War II the average duration of recession has been 11 months. Given that the U.S. has a relatively closed economy, has households and a banking system in relatively good shape, and isn’t an export-dependent economy to the extent Germany or some Asian countries are, any U.S. recession resulting from such a global recession would probably be pretty mild.

And then, coming out of said recession as countries reverted to economies less dependent on foreign trade, global correlations would presumably break down. If the U.S. is going to trade less with China, the U.S. and Chinese economies would be less interdependent, and it wouldn’t make sense for their financial markets to move in unison.

That “new normal” might mean higher inflation and lower growth, which should give pause to investors who have driven long-term Treasury yields to record lows.

It’s understandable why investors have driven yields sharply lower over the past couple of weeks. People are worried about slow global growth and are reacting to negative headlines and tweets. Even as trade and immigration have headwinds, we haven’t seen the same for the flow of capital, driving foreign money into the perceived safe haven of the dollar and Treasuries.

But short-term financial market mechanics don’t square with the two longer-term economic realities we’re confronting. Neither the “breakdown of globalization” nor the “false alarm” scenario seems like good news for Treasury bonds once this moment of uncertainty passes.

This column does not necessarily reflect the opinion of the editorial board or Bloomberg LP and its owners.

To contact the author of this story:
Conor Sen at csen9@bloomberg.net 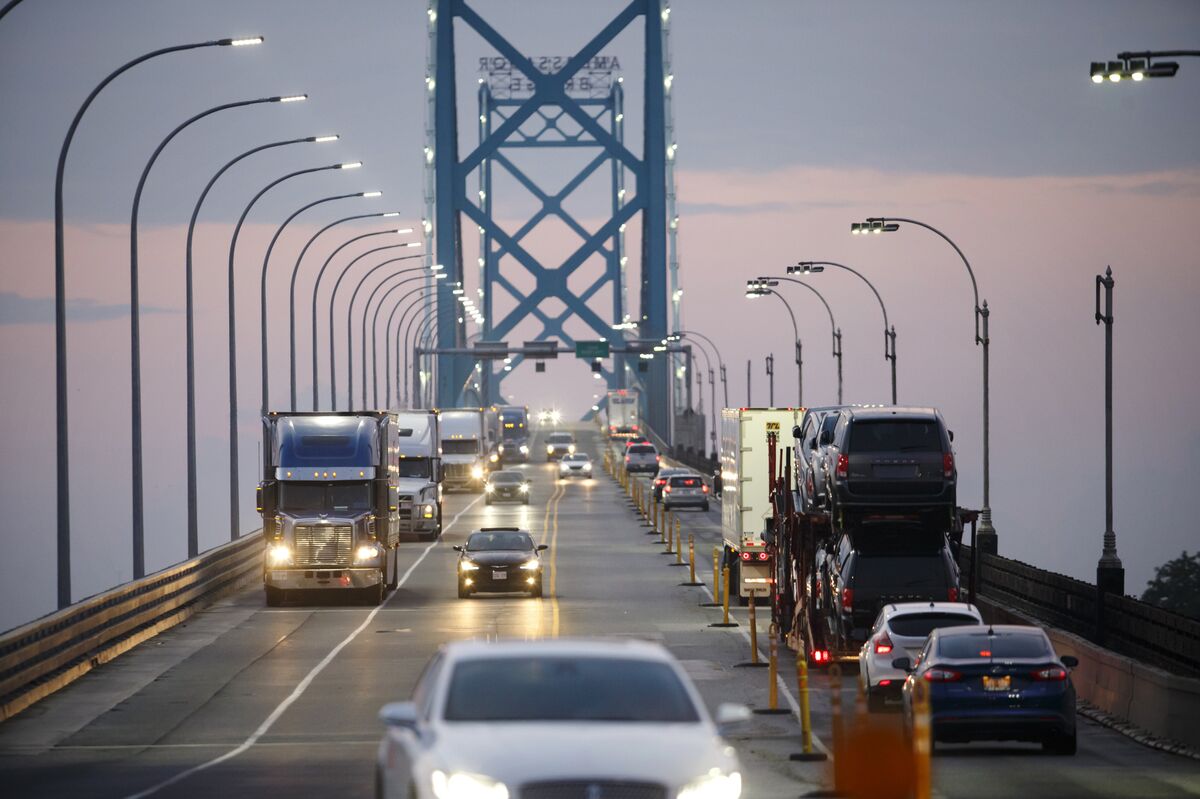 The Ambassador Bridge on the Canada-U.S. border in Windsor, Ontario. Photographer: Cole Burston/Bloomberg

Foreign Affairs Chrystia Freeland introduced a “ways and means” motion in the House of Commons on Monday for the legislation, which is the first step in the process for parliamentary approval.
The procedure comes ahead of a visit to Ottawa by U.S. Vice President Mike Pence, who is scheduled to meet with Trudeau on Thursday to discuss advancing the agreement. A decision by President Donald Trump’s administration last week to lift tariffs on steel and aluminum helped clear major hurdles for lawmakers in all three countries to approve the U.S.-Mexico-Canada Agreement.
There is an element of urgency for Trudeau, who last week said he was eager for Canada to ratify the deal. Parliament is scheduled to break for summer recess in four weeks — giving lawmakers in two legislative chambers little time to study and vote on the pact.

The House of Representatives passed legislation Thursday that would make significant changes to the laws governing retirement savings accounts.

The aim of the legislation, which will now move to the Senate for consideration, is to make it easier for more employers, particularly small businesses, to offer 401(k)s, and to let workers guarantee how much income their retirement savings produce by using annuities.
The bill, known as the Secure Act, would let people make contributions to their individual retirement accounts at any age, rather than the current age cap of 70½ years old. It would also raise the age at which required withdrawals for IRAs and 401(k)s kick in, from 70½ years old to 72. It would encourage 401(k) plans to offer annuities by laying out a way for plans to limit their liability if the annuity provider fails to make future payments. And it would let new parents withdraw $5,000 from retirement accounts penalty-free to cover expenses related to their new child.
The move would be the biggest change to retirement plans since Congress allowed for automatic enrollment and target-date funds in 2006.
“The Secure Act is a bipartisan success, filled with common sense proposals authored by members from both sides of the aisle,” Rep. Richard Neal (D., Mass.), who chairs the House Ways and Means Committee, said in a statement. “The legislation closes loopholes and makes it easier for small business employees, home care workers, and long-term part-time workers to save for retirement.”
Write to Ben Walsh at ben.walsh@barrons.com